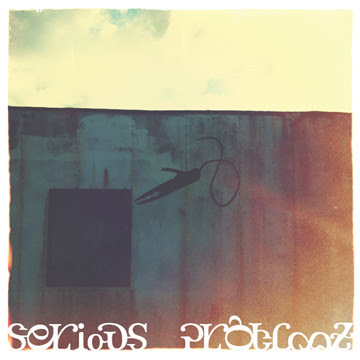 A really obscure band from the 1980s that never recorded anything and featured Lucian Telens of Bren't Lewiis Ensemble. They played what they called industrial rurf (rural surf). If that brings to your minds a sound between Dick Dale and bluegrass, well no that ain't it. There indeed is a very vague surf (and psychobilly reference in the background of their music mainly in the sound of the guitar (chorus, beefy upper string sound, a watery feeling) but other than that they play some really swampy psychedelic improvised and broken down noise rock/post punk on guitar, bass, drum machine and an unhinged vocalist who does his own thing and brings in various things on the table, such as dishes and a typewriter to bang on. I really like this; there is an immensely green-ish, oozy, damp and decayed feel to it, and the guys create both a threatening and playful atmosphere. Perhaps they could be likened to a mix between The Residents and Deadbolt. This was recorded in 1985-6, it never saw the light of day until it was released in 2014 on cdr by Butte County Free Music Society.