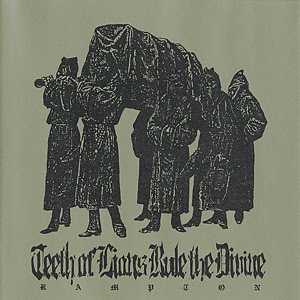 Not like that this is a rare album but I'm not sure whether it exists in 320 kbps so there you go. TOLRTD (named after the same-titled track by Earth) is a gathering of four mammoths of doom/sludge/drone, Stephen O' Malley and Greg Anderson of Sunn O))) on guitar and bass respectively, Lee Dorrian of Cathedral on vocals, and Justin Greaves of Iron Monkey/Electric Wizard/Crippled Black Phoenix on drums. The result is just mouth-opening. Take the deafening soul-emptying guitar drone of Sunn O))), mix it with the drum torturing strikes of Greaves (of course he is undoubtedly the greatest drummer in the genre) and get Dorrian on top in his one of his best performances ever, singing in a threatening and ominous style, far away from the hippyish shit of late 1990s Cathedral (maybe he was in a heavy doom mood, as Cathedral had just released the crushing Endtyme at that point), and you get an awesome classic of doom/drone. First track is a pun on Queens of The Stone Age's "Feel Good Hit of the Summer" with drug references and all, second track is a top-notch cover of fuckin' Killdozer's "New Pants and Shirt" and track three is an amazing ritual doom classic with church organ and all that borders on Thergothon worship. i used to listen to this as a teenager with my then-girlfriend after sex and the heaviness really emptied any energy that had been left after coming. Isn't all this convincing enough? 2002 cd on Rise Above.