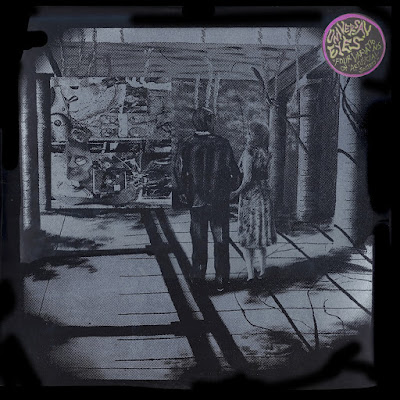 It was sad to hear that Jim Baljo is no longer a member of Wolf Eyes; his guitar terror was a great addition in recent Wolf Eyes albums; that said, Nate Young and John Olson still keep it real as a duo. In this new shit, they work together with Universal Indians, an early 90s group that featured John Olson, Aaron Dilloway and Gretchen Gonzales-Davidson, so in fact it's like Wolf Eyes together with Dilloway again plus an associate of theirs. Here they go even deeper into jazz territory, with Olson blasting awesome sax screams all over the place. Nate Young doesn't sing at all, but he is handling awesome terrifying electronics with Gonzales-Davidson, while Dilloway evokes some awesome heavy terror drones. Great improvisational music with a nice percussion touch and generous vibes of 1970s psychedelic kosmische music; as if you expected something less than awesome by these guys. 2018 cd on Lower Floor.