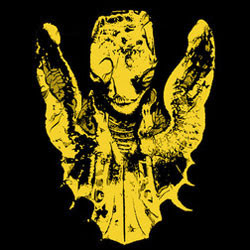 I've expressed my adoration for Integrity quite a few times in the blog, as they are probably the one band I can really call my favorite one, in their mixing of my best-liked styles, hardcore punk with extreme metal and noise, with a dark, evil, and twisted aesthetic. Roses Never Fade was the moniker singer and only remaining original member Dwid used after he completely ceased Integrity in the wake of the excellent To Die For. It's quite away from traditional Integrity, i.e. metallic hardcore with gruff vocals and mind-blowing guitar solos; in this album, where he is accompanied by two members of Pale Creation, they play acoustic dark neo-folk, close to Of The Wand And The Moon, albeit with a style that is also close to gothic, ambient, and post-punk, and in that sense it's not THAT far removed from the Closure album Dwid released as Integrity in 2001. Dwid doesn't really sing (yeah he doesn't have the voice for that anyway), but he mostly whispers, while the guys play mournful and epic acoustic melodies, and also offer some solos at a point that would not be alien in an acoustic version of Integrity, or in their calmer moments. My favorite track is "Fear For You" which has a more Death In June vibe. Despite his controversial music ventures and his choice to continue Integrity without any of the original members that really shaped much of the modern hardcore punk landscape, I've always thought that Dwid has been consistent in making good music no matter what the setting and his collaborators, and this album is also evidence of that. Of course, that excludes the Integrity 2000 albums... and of course his utterly worthless fucking Relapse releases since last year, which once more prove that Relapse is set on destroying any band that they manage to capture in their corporate nets. Meh. 2005 album on Rock Vegas Records.