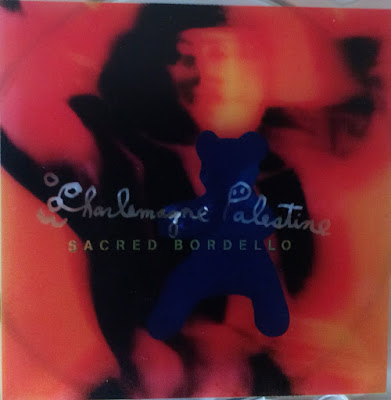 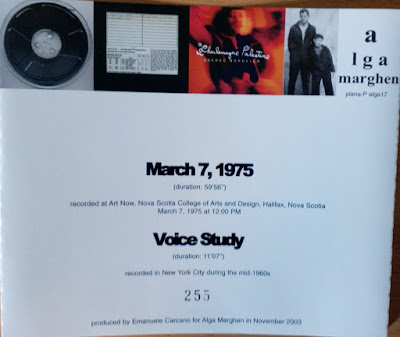 Before I bought this cd I didn't notice that the first track is a recorded lecture lasting an hour and that there's only one music track included, so one could say that the joke was on me. Anyways, this cd is a companion to the book Sacred Bordello, which is a biography-cum-reader/collection of essays, scores and photos of Charlemagne's long career. Now, the lecture in question took place at the Nova Scotia Art and Design College in March 1975 after one concert of his, and Charlemagne analyzes and responds to questions about his music philosophy. You can hear him writing with chalk on a blackboard creating shapes and charts, and ends up talking about incidents of his life, like a car accident and a meeting with a guy making a magic ritual, which he narrates to the university students. Frankly, at this moment I'm too busy to sit around to pay attention to the whole thing, but it does seem like a really interesting talk. The second track is a voice study recorded during the early '60s, involving multiple layers of vocal humming in different pitches. It has a mystical quality and sounds quite similar to Stockhausen's Stimmung and Steve Reich's vocal pieces. 2003 cd on Alga Marghen.