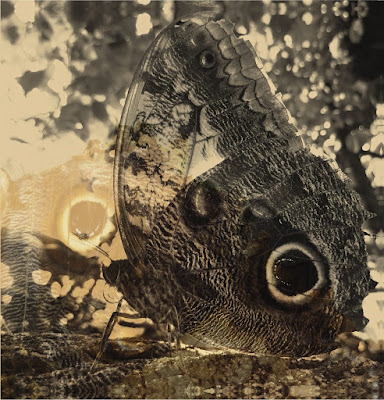 Whereas the previous solo albums of experimental music priestess Louise Landes Levi (here and here) had a more soothing and meditative effect, this one sounds more dramatic and dystopian; this is due to the theme of the album being the monarch butterfly, a species whose numbers have greatly plummeted in recent years. There is an immense feeling of loss and mourning in Louise's wailing sarangi, while in Ira Cohen's poem she recites at the beginning of the second she juxtaposes the strength and resilience of a creature whose brain is the size of a pinhead but knows how to fly to Mexico against the imminent extinction brought about by human negligence. On this album she is accompanied by Bart DePaepe of Sloow Tapes (who had released From The Ming Oracle) and Timo Van Luijk (both members of Ilta Hämärä) who recorded/mixed the album and probably had a hand in the instrumentation too, as there are drones and instances of some sort of dulcimer apart from the sarangi. Proceeds from this album will go to a buttefly conservation center, and since this album is supremely beautiful, I strongly recommend you offer some sort of financial aid straight through Oaken Palace. 2018 LP on Oaken Palace.