Completely and utterly stupid post of the day: Godflesh's Messiah and low-bitrate mp3s 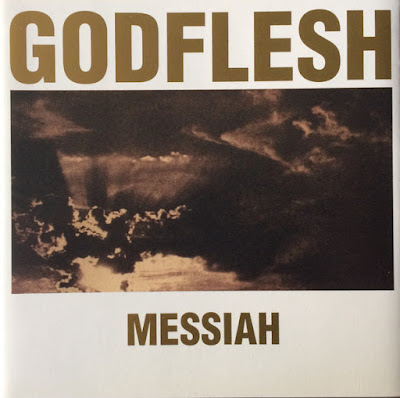 If you remember my Halo - Guattari post, I talked about the old Relapse records website and how much I loved its background music sample of Tribes Of Neurot's "Belief." So, when in 2003 Relapse re-released Godflesh's then-obscure EP Messiah (originally recorded in 1994, then scrapped for years, then first given out to members of the Godflesh fan club as a 2000 release by Avalanche Recordings) they posted on the site also the title-track, which is possibly the best Godflesh track EVER, both musically and lyrically. The track was encoded in 56 kbps, with the expected tinny drum sound it gave to the track's crushing drum machine, delayed vocals and floating guitar. Despite this, I absolutely loved the track and its totally hypnotic and cold vibe with a slightly dub undertone (for those who don't have the cd, there's also a dub remix of the track), which was accentuated by the shitty quality making it like the aural equivalent of the nth photocopy of something photocopied.  Some time later I went on to buy the cd itself, only to realize that the clear sound of the cd was not so much to my liking as the bad mp3 quality from the website. Well it's not that it sucked, but it didn't really made me feel sleepy, which is for me the criterion for what constitutes good music: If a track makes you fall asleep, then it's good. From then on, I intentionally started encoding albums and songs that caused me drowsiness (Burzum's Filosofem, Darkthrone's Transilvanian Hunger, Sunn O)))) in 56kbps to see what they sounded like. The outcome was ok, but it reached its peak in Godflesh (the whole Pure album is also like this) possibly due to the drum machine and the guitar sound. It doesn't work as well with heavy tones or fast drumming. So, the bottom line is that Godflesh sounds better in shitty 56kbps .mp3 files.

In support of this claim in this .rar file I've included a 56k encoding and a 320k encoding of the song,
plus a full version of the Relapse re-release of this amazing EP containing 4 tracks and 4 respective dub remixes by Justin Broadrick. This in honor of the old Relapse greatness which has now turned to shit. And to answer the comment of a fella who said that Relapse should resurrect Release Entertainment, I'd day that they actually shouldn't, for in the past 12 years at least the Relapse people do nothing but just ruin bands or sign second-rate groups.

Rips
The full Messiah cd
Posted by Vladimir at 7:14 AM