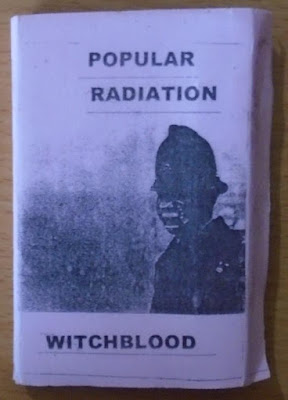 This is an amazing split live tape recorded in Newcastle and shared between Popular Radiation and Witchblood. PR is a solo project of Jazfinger's Hasan Gaylani, so you know you should expect something good. This isn't Jazzfinger-like improvisations but a grinding, climactic drone accompanied by some deep bass noises. It's very good, but the highlight is Witchblood, a project of the omniscient droner Lee Stokoe of Culver and one of the most talented women in noise, Lucy Johnson, whose Smut releases I've just posted. What we have here is one of the most beautiful and enveloping drone recordings ever made, consisting of a maniacal piano melody (played by Lucy?) and a deafening, screaming siren drone (Lee-made?) that sounds like it's played on strings, but I'm not sure. I really can't get enough of this, it has an amazing cathartic quality and must be placed among the classics of modern experimental music. 2014 tape on Boiled Brains Bootlegs.

Download (removed after artist's request)
Posted by Vladimir at 8:52 AM