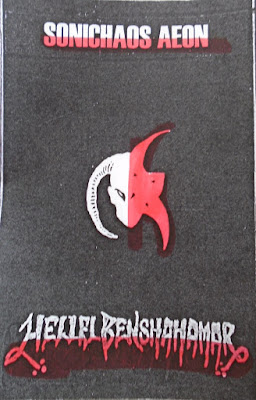 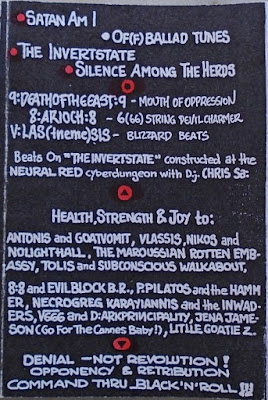 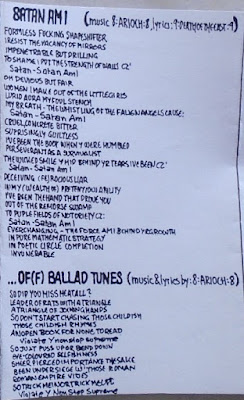 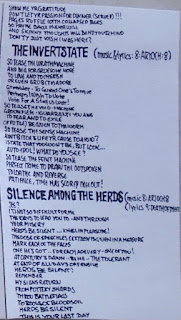 Sonichaos Aeon was a weird Greek band playing a mix of black metal and industrial/electronica, but with a satirical bend. The tape starts with the music from John Carpenter's Children of The Corn (thinking this is an Asphyx record) and their black metal side sounds like a primitive, low-level playing skill Hellhammer-ish and rock-'n'-roll-ish distorted mess with alternating shouted and high-pitched damaged vocals filled with delay that almost always end with some sort of mocking black metal seriousness, whether that is crowd applause or Spanish singing over Middle-Eastern scales. The electronic track here is kinda similar to the late-1990s black metal bands' take on industrial, accompanied by discordant guitars and the like. It's not that it's something innovative, but their delivery and mocking mood makes it something nice to hear. As a bonus, there are three more tracks coming from earlier demos, which were included in a compilation cd called Heavy Metal Antichrist, that sound like a cripple man's attempt to play Ved Buens Ende or Dodheimsgard; the last of the three, "Haunted," is a industrial noise ritual cover of the track by Old Funeral, the first band of Abbath and Varg Vikernes. 1999 self-released tape.