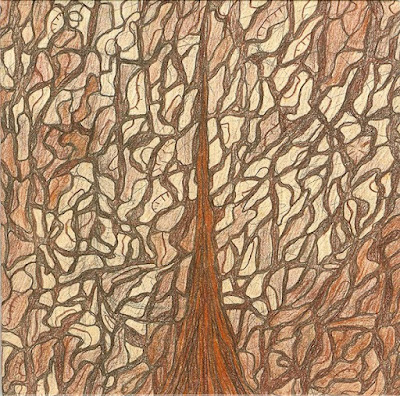 The third album of Skullflower is not only famous for its amazing content but also for the rotting surface of the original cd version that was the result of unsuitable material used by the pressing plant. Looking a little bit on Discogs this happened to many other cds and buyers chased the plant to replace them, something that happened minimally, according to my understanding. However, I'd be curious to look at the original cds, if someone would be willing to post photos. Anyway, Xaman is restored here in cd form and remastered, with enlightening liner notes by Stefan Jaworzyn (too bored to upload them, check them out on Discogs). It's a masterpiece of psychedelic noise rock, starting from the classic "Slaves," with its hideously devastating bass riff, to the lysergic rock jams of "Sunset" and "Xaman" to the spaced-out psycho jams of "Barbed Wire Animal" and "What Did You Expect?"- easily one of the best tracks ever made in the noise genres. Originally released in 1990 on Shock, this is the 2012 remastered cd version on Shock and Dirter Promotions.