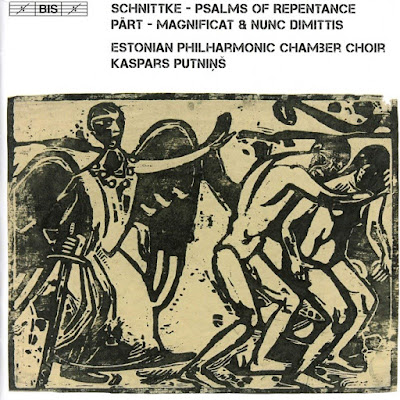 Latvian conductor Kaspars Putniņš in charge of Estonian Philharmonic Chamber Choir for a rendition of Alfred Schnittke's Psalms of Repentance. I know that Schnittke converted quite late in his life to Christianity and his music was often repressed in the Soviet Union, but I can't help feeling that his choral work that was written in 1988 possesses a Soviet spirit. There is a busy, dramatic, hellish, and agonizing tone in this material that might just as well have been included in the soundtrack of Soviet films or Tarkovsky's masterpieces; it also reminds me of the sublime music of Ligetti on 2001: A Space Odyssey. Check out the third psalm ("That Is Why I Live In Poverty") with a sustained note kept for many seconds by the choir for a completely unconventional approach to religious chanting. Coupling Schnittke's psalms we get Arvo Pärt's "Magnificat" (I think that its best version is on Te Deum but this one is good too, with a more ambient sound) and one of his very best psalms, "Nunc Dimittis," that is unbelievably heart-baring and humbling, even for someone who is a hardline communist coming from an Arab/Shia background like me. It's up to par with "Salve Regina," possibly the best piece of music ever written after Miles Davis's "He Loved Him Madly." I think that on this track Putniņš outdoes both Paul Hillier's version on Da Pacem (sung there by the Estonian Philharmonic Chamber Choir as well eleven years before) and Stephen Layton's more quiet one on 2003's Triodion. Check this cd out both for this amazing take on "Nunc Dimittis" and Schnittke's unconventional approach to religious music. 2017 SACD on BIS.