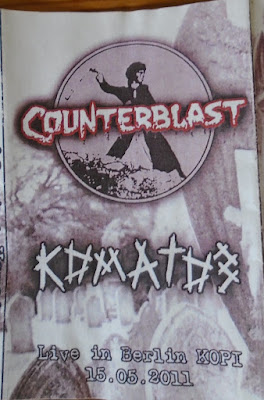 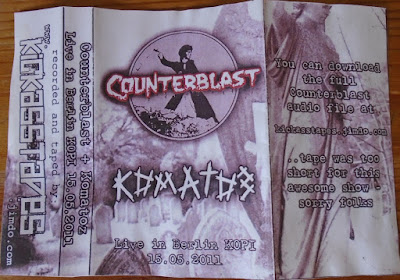 So the guy who made this bootleg tape had to separate one of the Counterblast tracks in both sides of the tape because of the length. Like it must have been very hard to release the whole Counterblast performance on a standalone tape. And as he says in the liner note, the full CB performance can be downloaded online, but the link for his site doesn't exist anymore. Pure idiocy. So, here we have a live Counterblast performance from a 2011 gig in the legendary 28-year-old Berlin squat Køpi, just a few days after the release of their most recent album Nothingness. All tracks are from said album (unfortunately nothing from Balance of Pain or Impassivity), along with "The Bitter End" from the 2010 Faceless 10". The sound quality sucks and worsens as the tape goes on, and for maybe half the duration there's only one speaker functioning. Great job man, couldn't have done better. But hey, still it's fucking Counterblast, one of the best bands in the crust/sludge world, and this rugged quality kinda fits the depression and anger so deeply entrenched in their music, and the keyboards sound especially menacing and oppressive, and the band plays brutally and with an emotional abandon, so we ok. Let's hope that listeners will be able to bear with the sound. On the other side, there's Komatoz, a Russian crust/thrash metal band, that sounds more on the metal than the punk side for my taste. 2011 tape on Kickasstapes.