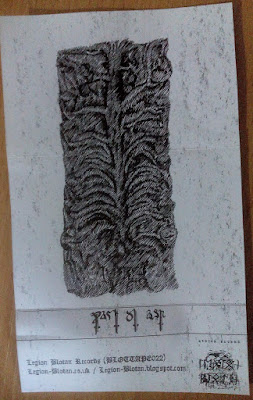 Yet another solo project of the ever-active Lee Stokoe of Culver/Matching Head, this time playing instrumentral, guitar-only black metal noise. This is a both sinister and mournful mix of cacophonous, oft-kilter fierce tremolo riffing with layers of fuzzy noise/drone in the background, not too dissimilar of early Burzum, but without the metally attitude. Late 2000s Skullflower is an obvious reference, as Lee played in that incarnation of SF, along with George Proctor who has released this tape. Highly recommended, as is the case with most of Stokoe's oeuvre. 2012 tape on Legion Blotan.