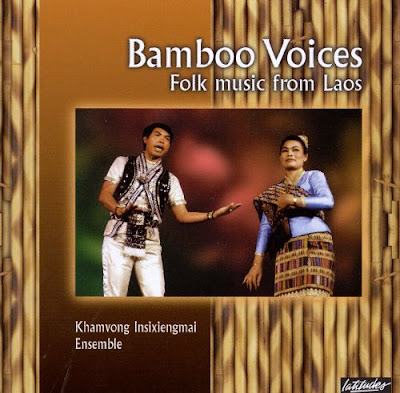 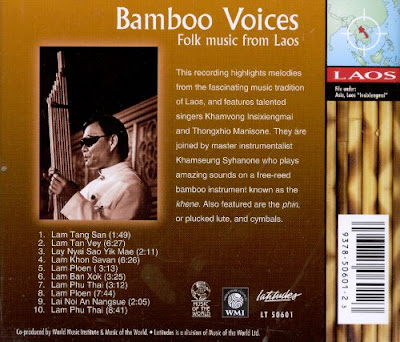 Many years ago I used to work at a record shop, and when there weren't many customers in, the employers assigned me at the jazz & folk music section (on busy days I used to be at the pop section where I was exposed to horrible popular music from my own country and the latest shit by Madonna etc. Fortunately Amy Winehouse had just released Back in Black at that time, so at least we used to play that a lot, aside from experimental techno and house). Obviously not many people came to my section so I had the chance to sample a lot of the cds that were in the most obscure shelves. One of them was this cd featuring music by Laotian singers Khamvong Insixienmai and Thongxhio Manisone and the musician Khamseung Syhanone. The music is dominated by a bamboo pipe instrument called khene, which also consists of a metal free reed, which produces a high-pitched and very metallic sound similar to the harmonica or even more the accordion. In the 1.05 of the fourth track there is a very nice and funny distorted sound made by the instrument. Some tracks also include a lute called phin. The music is very uplifting and joyful, albeit a little annoying due to the ringing sound of the pipe. 1996 cd on Music of the World.