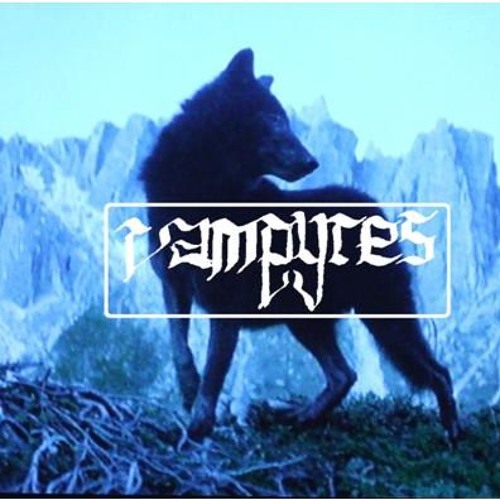 Vampyres is a hot new project by Lee Stokoe of Culver/Witchblood/Matching Head tapes/millions of other projects and Martyn Reid of Depletion (2017's  Lost Signals tape on Matching Head was a masterpiece of grey industrial synth bleakness) and in their releases they play intense and dense droning industrialized noise quite close to Depletion. If Culver is the all-devouring primeval drone of the Great Old Ones lurking out of space to engulf us, Vampyres is the dark daily presence of Nyarlathotep, the carrier that brings the message that our technology-infested world will be engulfed in evil.

Since Lee prefers Culver and  MH material not to be uploaded online, I will provide links to anything that has been posted online by labels, and links for potential purchases.

So hypnotic and miserable is the sound that I fell asleep listening to it while waiting at a public service.

Like a pool of green toxic fluids dripping from big evil factory machines.

Voyeurs At The Gates Of Hell (2018, Matching Head) - Buy it
Caustic like acid on throbbing flesh wounds with deceptive moments of lull.

The most recent one and possibly the best one yet along with Bloodstream. Three tracks of evil modular synth industrial drone of the order of Maurizio Bianchi and early Wolf Eyes.

Two live documents of gigs of Vampyres, where they are even more deafening, abrasive and threatening. On the other side of the first tape, Rust Ruus plays high-pitched sounds which sound to me like they have been created with wind instruments - but I'm not sure. On the other tape, Ali Robertson of Usurper and Joyce Whitfield play a live set of dictaphone sounds and Posset-like autistic mouth sounds. brb>voicecoil offers a set of pulsating and slightly rhythmic/a-rhythmic electronic weirdness. Spoils & Relics sound like they are constantly connecting live wires to each other along with samples of some robotic talking are heard in the background.

Also, Vampyres have set up a soundcloud account, where they have posted two more tracks that I haven't seen anywhere.

(and of course, these tapes can be got via email contact)
Posted by Vladimir at 12:43 AM