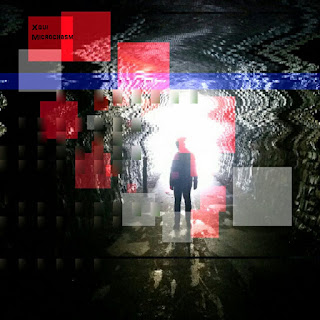 Xqui's fourth full-length came amidst a storm of other recordings he posted on his bandcamp during the quarantine. At first I thought that this would be his most structured releases due to some beats here and there, but it reveals itself as the exact opposite. It might not have the utterly Lovecraftian subterranean feel of other releases (apart from "Scale"), but it is one of the most psychedelic ones, at it reminds at times of Coil's mid-90s phase and even other mind-bending Coil-related projects such as The Threshold HouseBoys Choir and UnicaZürn, and it has some weird fuzzy beats that sound similar to old video games!

You can buy it for a very small price on bandcamp, and it's always a good idea to support his music.

Wormhole World is a label with which Xqui is closely related and it has released recently some quite nice music.

First is Sky Drew Near by Robyn G Shiels & Steve Nolan, which is a nice change from the label's usual abrasive electronics output, as it is a dark pop heartbroken music album with a touch of americana. I really liked this one.

With Seasonal Affect by mzungu is an adventurous attempt at wintry ambient with very beautiful frozen synth washes that you really must hear.

Cartography by Outside The Glitch is one of the best albums of 2020 so far. It is superb imposing ambient . It has all the best elements of Basinski and Robert Rich shaped in a very personal approach that I would dare say incorporates also elements of elemental/primordial beatless ambient techno. I see that the artist has also done other releases on Wormhole World which I will definitely give a listen to immediately.

A slightly older release is Negative Dialects by Jewels Of Shame, some guy wanting to be shrouded in mystery, as most of his tracks are titled by date of recording, and they have all been recorded during the 2000s. There's some primitive horror noise/ dark ambient with a mostly crude sound and an unfinished feel to it, which I like, as it presents a non-linear and anti-closure/anti-perfection approach that I find interesting as in other artists such as J.G. Sparkes.

The last one of the recent lot that stood out is Dejado by Quimper, which is fun dark synth-pop/ hypnagogic electronica, like a more electronic/beat-y Ariel Pink with dark house music lurking somewhere in there...

As always, both Xqui and the Wormhole World label are very-hardworking and cool people that really deserve some support, so don't hesitate to pay some little cash to get these very nice musics.